Let's get the first thing out of the way: I'm super excited writing this post. As someone getting uncomfortably close to the age of 30 I think I have reasonable credentials to say I grew up together with broadband internet access. As a kid computers were a huge part of my life, and I still recall getting my first high speed connection circa 2000 in Montreal from Videotron. I think the connection was something like 3Mbit downstream and 128kbit upstream with a 6GB data cap. It was delivered via a proprietary Com21 (pre-DOCSIS) cable modem and it was a game changer coming from 56k dialup. As I spent more time on the internet, particularly on DSLReports, I started reading about high speed internet access in other places, like Scandinavia. I recall reading about a small village in Sweden operating a community based network that offered residents Fast Ethernet (100Mbit) service to their homes. And then there were commercial offerings like Bredbandsbolaget delivering similar services on a commercial scale. Holy crap.

Well, fast forward 15 years and it happened here in Canada too: new job, new place - and with it FibreStream.

So what exactly is 'fibre' internet? This term has become less of a technical consideration and more of a marketing catch-phrase. Bell markets its VDSL services as "Fibe" playing on consumer confusion. FibreStream targets only a handful of buildings (mostly high-density and recent-construction condominiums) around Ottawa and Toronto. They don't exactly make it straightforward to find out where they offer service, but this is their availability list in Ottawa (current as of September 2016):

What FibreStream offers is more accurately called Fibre-to-the-Building service, which is then distributed into individual units via Ethernet over copper. Of course, "CopperStream" doesn't quite have the same ring, and frankly there is no need to terminate the connection with fibre optic cabling all the way to the customer's equipment. If anything, doing that would make the service more expensive and harder to use. (How many of your networked devices have SFP ports?)

As of November 2016 these are the services offered and respective price points:

All services are advertised as entirely unlimited. Cool beans - of course I signed up immediately for their Fiber 50 service.

The only immediate evidence of FibreStream's presence in my building was this ad in the mail room: 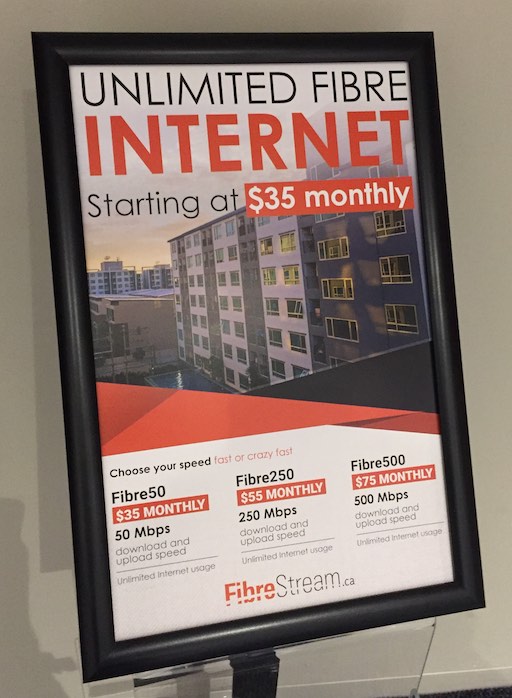 I called them and spoke with a personable and friendly representative. He booked my installation date and sent me a Google Calendar invite. Neat. The installation cost was $100 + tax. I inquired about static IP addresses and was told they offer them for a small monthly fee, but in the end I decided I didn't actually need that feature - it is however a rarity among consumer internet providers, and very much welcome.

The installation itself took only a few minutes. Their technician simply took the existing CAT3 four-pair phone cable and repurposed it for Ethernet service. I did subsequently inquire with their support about the use of CAT3 instead of the IEEE 802.3-2008 recommended CAT5e/CAT6 cabling for Gigabit Ethernet but they insisted over short runs the cable will perform adequately. If this were a business class service I would not accept that answer, but in this case I have no evidence to the contrary. ¯\_(ツ)_/¯

After all was said and done (and yours truly performed a bit of cleanup) this is how things looked: 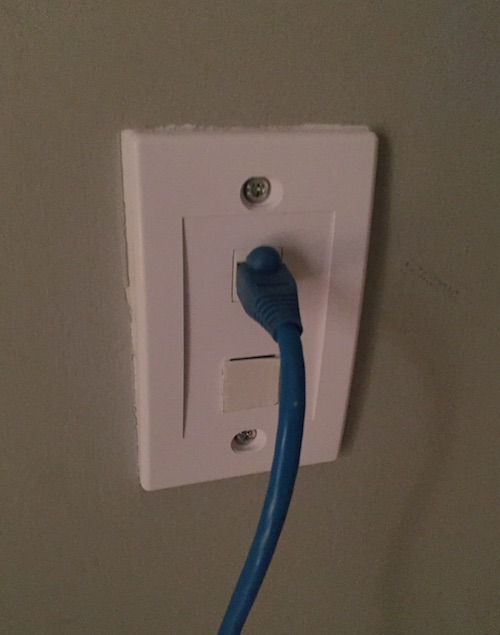 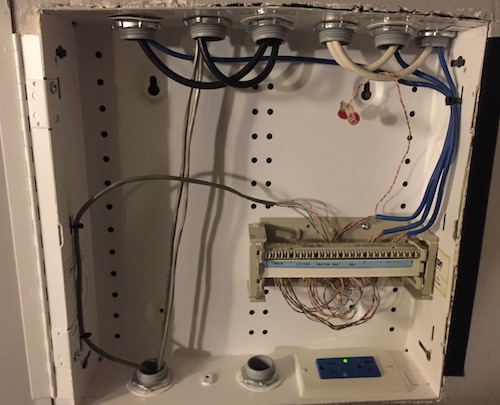 FibreStream provisions 1000Mbit ports to their switch in your building, and then uses some form of Quality-of-Service (QoS) to throttle the connection down to the tier you actually pay for. (By default they set ports at 100Mbit so it may take a few days before your actual package kicks in.)

Here's a speed test on the 50Mbit service:

What's interesting to note is their QoS algorithm allows for very high short bursts. So I am able to burst both up and down at 150+ Mbps before getting throttled down to 50Mbps, but the system tends to err on the side of caution and I actually get slightly faster speed service than I officially pay for, which comes in handy with bursty traffic, such as loading a heavy webpage. Having this unadvertised feature is a nice touch, I'm not sure if it's intentional but I suspect that it is given that it's a well-known approach used by other ISPs such as Comcast.

The QoS got me wondering about what type of equipment they use within the buildings. An easy way to find out is by dumping the ARP cache on your router. This will display the hardware address of nearby neighbours. In my case I got: 4c:5e:0c:xx:xx:xx. Plugging this in to a MAC address search yields: Routerboard.com

Routerboard is of course a brand of Mikrotik which is well known for very aggressively priced and customizable network equipment. Looking at the product page I'd venture to guess FibreStream uses switches similar to these.

That got me thinking - what about upstream internet access? Well, easy enough to figure out from public peering information. Just head over to ARIN's site, find out FibreStream's AS number and plug it into bgp.he.net:

The results are a bit odd - they have a single peer. A bit of investigation shows that numbered company is a Toronto based colocation and webhosting provider called 3Z Canada. The company's site appears quite out of date and has some rather odd and unsubstantiated claims. That said, they seem to have okay reviews.

Since the website didn't give a good feeling for what kind of infrastructure is supporting FibreStream we can do a bit more BGP sleuthing to find 3Z's own upstream providers:

This is really good news - both are Tier 1 transit providers. To be honest I was expecting lower cost alternatives. Likewise, 3Z peers at the Toronto Internet Exchange with a 10Gbps port - this is also excellent news as it enables local traffic to stay very fast. So the remaining question is how fast their links to Level 3 and Telia are. The former may be answered via a traceroute to www.level3.net.

Usually router interfaces follow a standardized naming convention and xe typically refers to a 10Gbit interface. This trick didn't work for Telia's naming scheme, but I think it's safe to assume the burst upstream capacity is likely around 20Gbps to transit providers + 10Gbps to TorIX. Getting an Ethernet link to this type of upstream capacity for $35 a month in your home is a pretty sweet deal.

One interesting thing to note is the self-reported traffic levels in PeeringDB which are "1-5 Gbps" skewed "heavy inbound". This info may be slightly out of date, but it shows just how small an operation this is. TekSavvy is at 300-500Gbps and they are small compared to Rogers and Bell.

Why does FibreStream partner with 3Z? It's not entirely clear - but one reason might be due to the way 95th percentile commercial internet transit billing can work:

If you are a primarily outbound (server) provider it may make sense to use 'free' inbound (consumer) bandwidth to run an ISP on the side. Of course, it's only a guess.

To wrap up, it's worth mentioning FibreStream partners with VMedia for IPTV service and does offer some form of VoIP telephone service. I cannot review these as I do not subscribe to them, but there are lots of VMedia reviews around.

I'm always skeptical of deals that are too good to be true and unlimited cheap internet access is one of them. The terms of service specify:

If reasonable usage limits are exceeded as determined us, FibreStream reserves the right to terminate service

Those are some pretty unreasonable numbers. That said, there seems to have been some past controversy with one user kicked off after 'only' 1500GB in a single week back in 2014. That is a bit worrying, though FibreStream stated (in a Tweet that seems to have since been deleted):

This would seem to indicate there is a soft cap of maybe 300GB per week. Some more clarity on this issue would really be appreciated, but for $35 a month this seems reasonable. If you need to host heavy duty servers perhaps a low-cost dedicated host like OVH is the answer. However, I will update this post if bandwidth use becomes an issue.

Joking aside the service is much faster and much cheaper than anything else available in Ottawa, whether from Bell, Rogers, or the myriad of third-party providers piggy backing on their last mile infrastructure. In Toronto there is bigger and more established company called Beanfield that offers upwards of 1000Mbit service, at a very similar price but presumably in a different set of buildings.

FibreStream strikes me as an incredibly scrappy, young company. In a market where traditional telecom companies (Rogers, Bell) are scrambling to sell high-priced "value-add" with their internet access FibreStream focuses on selling you the connection, and nothing more. This is obvious in many ways:

I'm perfectly okay with all this, and in fact encourage it. Keeping the bloat down is what allows them to offer this insanely fast and cheap service.

My advice for FibreStream would be:

I look forward to see how this service evolves in the future and I am very happy to be a customer.

Best internet access deal in Canada. Hands down. If you are fortunate enough to have access to their service, it would be silly not to get it. If you live in a new-ish condo building, pressure your condo board to have FibreStream installed in your building. It's awesome.

In my new role I've found myself having to debug Ruby native gems again. Debugging C code is normally…